Last night we went to the St Regis Hotel. The hotel is said to the best in the city. We ate at the ‘Gordon Ramsey’ OPAL restaurant.

What made this dining experience different was that the meal was created and cooked by Mr Ramsey himself. Although the restaurant bears his name, I believe it was the first time he had been in Doha.

We arrived at 8.30pm, to sit down at 9pm, rather closer to my bedtime than I would usually choose to eat. But as that was the only time available and we thought the experienced not to be missed. 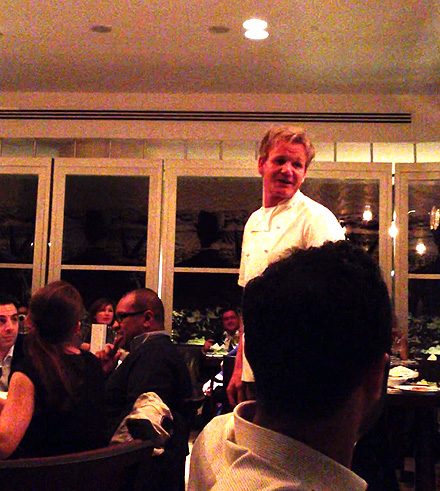 He appeared in the restaurant just as the first course was about to be served. A short speech and he was away, presumably to the kitchen.

There were five starters, all bought to our table, followed by duck and finally by a pie. Unfortunately I forgot to photograph the menu so I can’t give you the fine details of all the ingredients.

Although Gordon Ramsey said he’d return to talk to diners during the evening, he hadn’t appeared by the time we decided to leave.

It was an excellent meal, not too expensive and compares favourably with some of the best meals I have eaten. Maybe it tasted better because it was a celebrity chef, or perhaps it was just a really fine meal.