Yesterday we went to our second major sporting event… the semi finals of the Qatar Open Tennis.  For 75QR (£13), we got seats overlooking the net.

I have never been to a professional tennis match. I am not a tennis fan… I guess I lost interest after the era of Borg and McEnroe.

We chose to go to the semis because it involved the four top seeded players.There were three matches that day starting with the women’s doubles followed by the two semi finals of the women’s singles. We arrived mid way through the doubles to make sure we got a good location, as seating was unallocated. 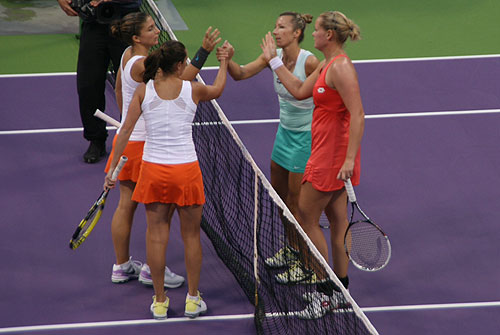 I had not heard of any of the four players in the doubles. As the match progressed I silently rooted for the Italians because they had, at least, made the effort to wear identical clothing… and they triumphed.

There was a 30 minute break for the first of the semi finals between two players I had also never heard of. It perhaps shows that I am not a follower as Victoria Azarenka is ranked number one in world and Agnieszka Radwanksa is at number four.

Azarenka is known for the odd noise she make when hitting every ball. It is hard to describe the sound but it’s a sort of singing whoooooooo. It is quite an interesting sound for the first few times, but after hearing it, at a guess, over 800 times during the match it becomes slightly annoying. The match was good but never very exciting. Radwanksa lost the match.

At the end of each match the winner hit several ball into the crowd. The resulting scramble for an ordinary tennis ball amongst grown men was surprising.

I was particularly impressed by the professionalism of the ball boys who ran back and forth to collect balls without getting in the way of the players. 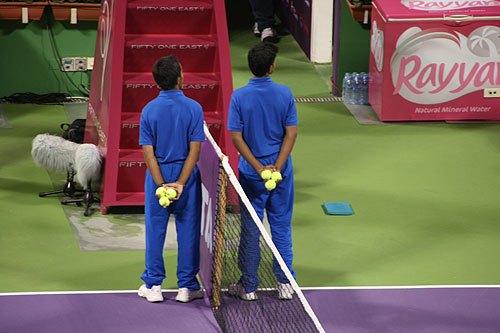 I remember as a youngish child wanting to be a ball boy at Wimbledon. But I knew that they only used boys from Dr Barnados homes, and having to be an orphan seemed unfair as it wasn’t my fault I had parents. If only there had been a Court of Human Rights when I was a boy, I am sure I would have had a good case.

The match we had been waiting to see was Sharapova against Serena Williams.

It was not a disappointment being a much more exciting match, in what I believe is described as serve and volley. They spent most of the time outside the borders of the court smashing the ball back and forth. The fastest serve was 187kph by Williams who won the match. Serena was my choice to win… it maybe a hangover from the cold war but I found I couldn’t root for the Russian.

It was all a great spectacle but there was a sense of watching people with OCD. Players repeatedly took three balls when getting ready to serve, but hit one back to the ball boy each time. As far as I know each tennis ball is exactly the same, but for some reason they had to make a choice. In the doubles the partners ‘low-fived’ after every point. Sharapova faced away from the court for a few moments before every point… maybe it was to concentrate?

It was really enjoyable watching the tennis in the cool winter evening and we’ll probably go again next year. The final is today… I am not too bothered who wins, but I am betting on Serena.

One thought on “Anyone for tennis?”