The Versailles jewellers in Doha sells gold jewellery that might not have been out of place at the French palace of the same name. It is, instead, just down the road from the Al Sadd Food Palace.

Here are just three of the ten window displays.

I am not sure exactly who might wear these and for what occasion.

I am also uncertain what you call them, but they remind me of pictures of the sort of thing worn by the wives of the Pharoah, or such like, from the Encylopaedias I read as a kid.

My favourite is the Queen of Sheba one… that’s my name not theirs, where the piece is finished off with a crown.

There is no indication of retail prices in the window… they will not be cheap.

I know it’s extremely childish but I really want to order the Braised beef.

One the things I enjoy about living in a warm country is not having to wear shoes and socks. At weekends I wear sandals. For much of the year Qatari men also wear sandals.

The traditional thobe, as worn by Qatari and Gulf men reaches down to just above the ground.  Sometimes, particularly in the colder weather, a pair of black shoes and socks can be seen protruding from beneath the white. This is not a good look. But mostly the men wear sandals beneath their thobes.

Most shoe shops sell a fairly universal wide range of shoes, but there are also shops which specialise only in sandals.

The popular style is completely open toed and slightly wedge shaped. White shiny leather is favoured and blingy gold buckles are also essential. By comparison, my sandals are much more practical and understated.

A lifetime of wearing sandals must be good for the feet of Qatari men, unlike many younger women in Qatar who squeeze their feet into precipitous designer heels and will probably all have foot problems in later life.

New buildings appear in Doha almost overnight. There are construction sites all over the city putting up huge steel and glass office buildings and hotels, shopping centres, apartment blocks, and villa compounds, employing tens of thousands of expat labourers.

I was particularly taken by this brand new showroom for an interior design company called Doble Ve, which I believe is Spanish for Double U in various Latin American countries. 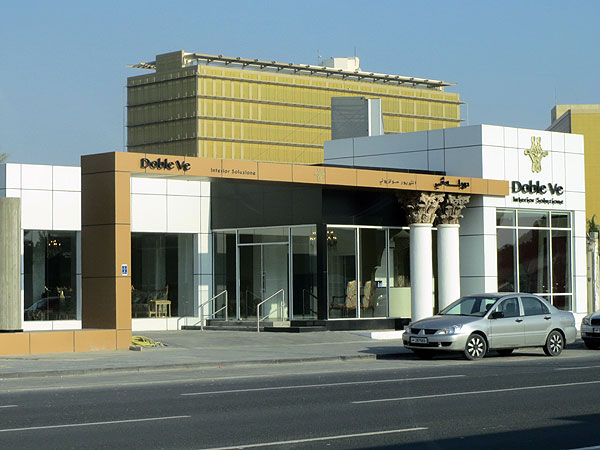 The exterior design exhibits a strange mixture of ancient and modern, combining the clean tiled surfaces of a contemporary mortuary with the ostentatious grandeur of the Temple of Zeus in Athens. 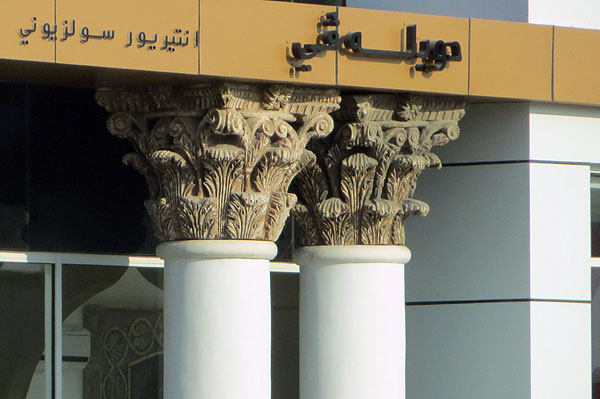 I am fairly the certain that the width and height to not conform with classical architectural proportions and that the column should be fluted… and, of course, the pair of columns with the absurdly large acanthus decorated capitals don’t actually hold anything up.

Exterior design at Doble V is clearly somewhat unusual. With some anticipation, I will look inside soon to see if their interior design is as quirky.

My mother told me spitting was a dirty habit. I have never really spat in my life other than the white froth at the end of my twice daily tooth-brushing.

But here in Qatar spitting is much more common place than I have been used to in the UK. The exception is on the soccer field where I believe the FA rules, and my observations, suggest that a player must spit at least twice during the match, as long as it is not at another player or fans of the opposing team.

In Doha, it is not unusual to see someone open a car door and lean out while waiting at a red signal and deposit a gob of spit onto the road. Walking along any city street, you will come across small glistening pools of spit. A common sound is also the loud guttural rasp as a mixture of saliva and phlegm is summoned up ready to be deposited on the pavement.

It appears to be only men who spit. I have never seen a woman spit. Maybe there is some physiological difference which means that women don’t generate surplus mucus. In this age of equality I find this explanation difficult to swallow.

For many years I thought that women did not pass wind, but it was a revelation to find out that they were just as gassy as men. Women were just much better at disguising it whereas for a man there was a definite sense of achievement. Maybe this also applies to spitting?

In this case ‘foul’ means a Middle Eastern food made from fava beans.

This evening we headed off to the Khalifa Stadium for the international friendly match. It rarely rains in Doha, and when it does it generally a very light shower. But tonight, following a clap of thunder, the rain began as the whistle blew to start the match and continued for the next 45 minutes. It stopped at half time then restarted for the entire second half.

It had been difficult to find anywhere to park near the stadium. The roads were crowded with match goers and every available conventional space was filled. We managed to park on the hard shoulder of the main highway.

We walked to the Villagio shopping centre for a quick burger and chips where I checked to see which gate we should use, before walking to the stadium about 45 minutes before the kick-off. We found our gate and joined the line. A guy came round to check tickets. He, helpfully, pointed out that my tickets were for the Exxon tennis tomorrow.

With some sense of responsibility at managing to have the wrong tickets, we walked back to the car and drove home. We got back at 5pm which gave us just enough time to get the correct tickets and return to the stadium.

This time we managed to find a space on the raised reservation between the main highway and the sliproad and raced round to the stadium. We left 10 minutes before the finish to make avoid the inevitable traffic hold-ups when tens of thousands of people all tried to leave at the same time.