This afternoon, my journey home took me anti-clockwise on the C Ring Road. I joined a long line of cars, in three lanes, waiting to get to the signals on the C Ring road at the White Palace junction.

The queue of traffic stretched from the previous crossroads. We edged slowly forward towards the junction. I waited patiently along with other vehicles for the lights to change and move twenty cars closer.

Beside the three lanes is a hard shoulder. It is used by impatient drivers to bypass all the waiting traffic. They pull out, drive along the hard shoulder, then force their way in when the lane ends.

As we reached the underpass, four drivers took the opportunity to make their move, leaving their lane and speeding along the shoulder, pleased that they had saved a few minutes from their busy lives. Only this time, they were trying to pull in before they’d even go through the underpass. 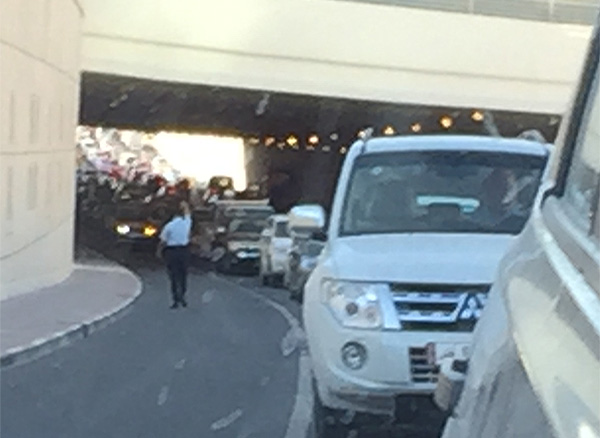 At the next change of lights we saw why they were trying the get back in lane. A traffic policeman was standing just round the curve in the road, taking down numbers of violators. Doubtless they will receive a 500QR fine.

A few days ago I received an SMS reminder that my car insurance was due for renewal, which also signalled it was time for the annual re-registration of my car. That meant two tasks… first renew the car insurance, which I would need to have been done prior to vehicle registration, as they would need to see insurance covering the next twelve months before they would re-register.

The first visit to the insurance company after work proved fruitless, as they closed at 3pm and the earliest I could get there was just after 3pm. So it was back there at 7am when they opened yesterday morning. The process only took 10 minutes but as the clerk didn’t arrive until 7.20am I was there a full half-hour.

At 8.30am I received a phone call from them telling me that they’d not given me all the documents… so another 7am visit was necessary today, but at least this time she was already there, and I guess I should be thankful they told me about the missing documents.

After work I went to the Traffic Department, a 15 minute drive away. I knew the drill from last year… collect the deli ticket from the circular counter in the middle of the large hall and head to the numbered counter. I went up to the two uniformed men and informed them that I was there to register my car. The guy on the right looked up…”Sorry they are closed for three days”, stood up and drifted off.  OK I thought, this is Qatar, these sort  of things happen. While I was deciding that I would to go home and come back in four days time the other fellow handed me a ticket. “He’s just joking”.

I headed off to counter A67. I handed the old registration card to the veiled lady behind the counter together with the new insurance documents. “You have a traffic violation” she said. Apparently I had been caught by a speed camera on the Corniche at 6am on Saturday 4 October. You maybe wondering what I was doing out that early in the morning. October was still very hot, but at that time before the sun was up the temperature was pleasant enough for an hour’s walk.

I paid the 500QR fine and the 100QR registration fee. The new card was printed and given to me along with the receipt for my speeding ticket.

One of the things I shipped out from the UK was a HP printer along with a few spare ink cartridges. When the printer told me that it was getting low on ink, I headed down to the computer shop a few minutes walk from our flat.

There was a stand of HP print cartridges on the far side of the shop. I looked along the rack for cartridge 300… it wasn’t there. I asked the salesman where I would find it. Not only did he not have any, he had not heard of that number.

A little bit of web research told me that cartridge number 300 is for European printers. Cartridges for the identical printer sold in the Middle East or the USA would be numbered differently and would not work in my machine… also they are priced differently according to the market. I don’t quite understand the reason behind regionalisation, other than it must be a ‘bottom-line’ decision.

I had a few replacement cartridges shipped out to Doha, but the last of the black ink is now getting low so I have now decided to get HP to swap the regionalisation to the Middle East so that local cartridges will work. I have spoken with the local HP service centre. They tell me I will just need to contact them again once the cartridge is empty and they will talk me through changing a setting in the hidden maintenance menu.

I gather from various online forums that I can change back to ‘Europe’ at some time in the future but that only two changes are permitted. I am not sure this is correct, but if so, it is a restrictive practice.

If you are thinking of bringing a printer with you to Doha, my advice would be to leave it behind, save on the shipping costs and buy a cheap one here instead.