My car is just about to reach its third birthday. This means that it is due for the Qatari equivalent of the MOT test. But let’s roll back a week as at the same time the car needs to be re-registered and the insurance renewed.

I renewed the policy online, paying by credit card… very quick and straightforward. I received an email almost immediately, confirming the renewal with two attachments – the receipt and the policy document. However the policy document had spelled my name wrong. In place of a D in my last name was a P. I don’t know how this happened, but definitely not my typo as D and P are way apart on the keyboard.

Either way I needed to get it replaced, the car re-registered and tested, which meant a day off today, and a trip to the Beema offices which is what I had tried to avoid by renewing online. They issued a corrected certificate which I took to the Traffic Department to register the vehicle for another year. I’ve written about registration in an earlier post. I was in and out in less than 10 minutes.

Then on to the Fahes Testing Station. There are two in the Industrial Area, but I hate the chaos of the place so I decided to drive to the testing station in Al Wakra instead. Although it’s further away, I hoped the journey would be quicker and easier than getting to the Industrial Area, and possibly quicker to get seen.

Google maps managed to misdirect several kilometres too far, in fact passing by the Fahes site. I turned round and drove some way towards Doha before I could U-turn back. If you intend to go the testing station, it’s currently a right turn at the  first Al Wakra roundabout, then a sharp right through the Woqod Petrol Station to the Testing Station behind.

I drove up to the kiosk, gave in my registration, paid 75QR and joined a short line of cars. There were 4 lines of cars moving slowly through the building. 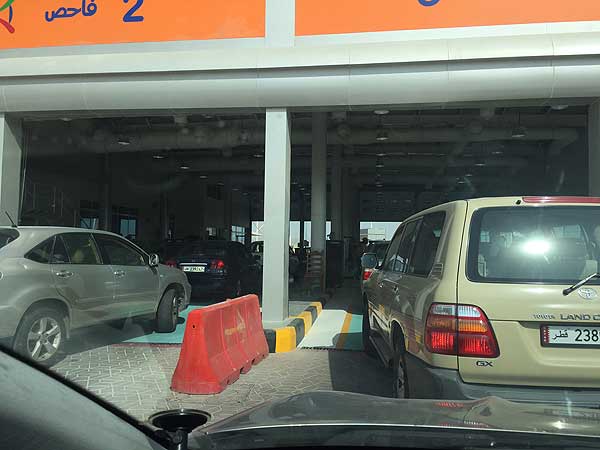 The process was very efficient. I stayed in the car, moving to the passenger seat while the technician moved the car forward for each phase of testing. This included, exhaust gases, lights, brakes on a rolling road, and finally a visual inspection from a pit under the car. The results of each test were displayed on screen. 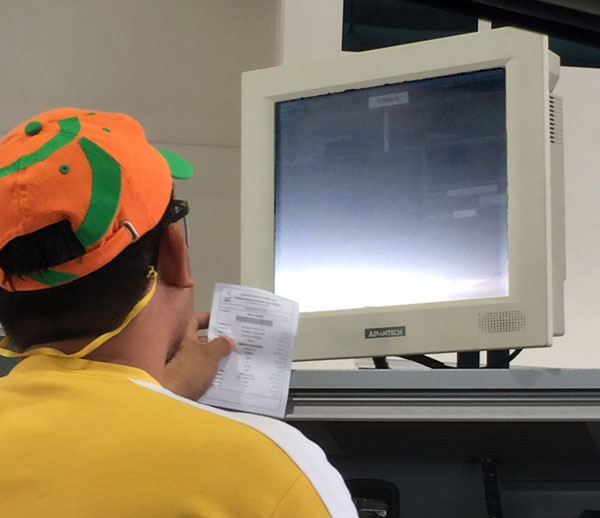 It was all over in 215 minutes. I passed, or at least the car did, and got a text to confirm it. 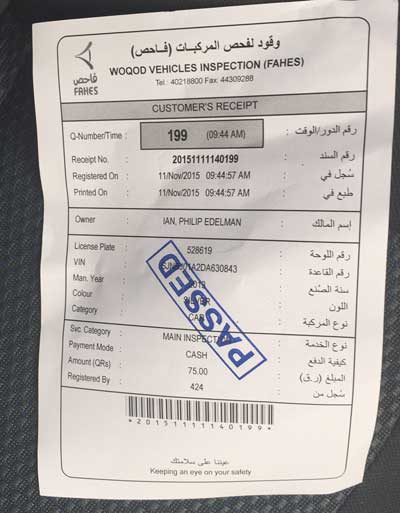 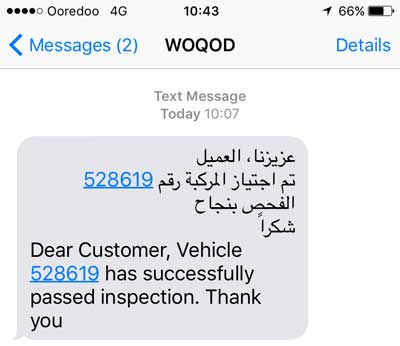 On the way out the guy in exit booth told me I had to go into the office with my registration and insurance. I parked and went in.

“What have you come for?” I was asked.
I told him and showed my shiny new registration card.
“You’ve got registration” he said, “Why do you come here?”
“Because the man in the booth told me to”

He said I could leave, which I did. I think you can also complete you registration at the same time, which would have been helpful to know.

Error: Twitter did not respond. Please wait a few minutes and refresh this page.