In June last year I reported that I came across a Qatari car in Totnes in the distant south-west of the UK. 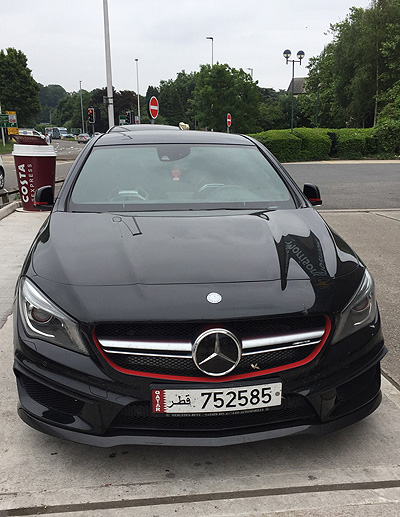 Today, a news alert which lets me know when ‘Qatar’ is mentioned led me to the following headline.

Speeding Navy cadets who clocked up 99 points in just four months between them are fined more than £12,000 after neither showed up for court.

The speeding naval cadets were Qatari, undergoing training at the Britannia Royal Naval College at Dartmouth. The cars mentioned in the news report are Mercedes, just like the one I saw parked at the petrol station. I am assuming that it belonged to one of the two cadets, as Dartmouth is ony 20 minutes away from Totnes.

Dartmouth is one of the loveliest South Devon towns sitting where the River Dart meets the sea. If you are ever in Devon, I recommend visiting Dartmouth, but please, no speeding. 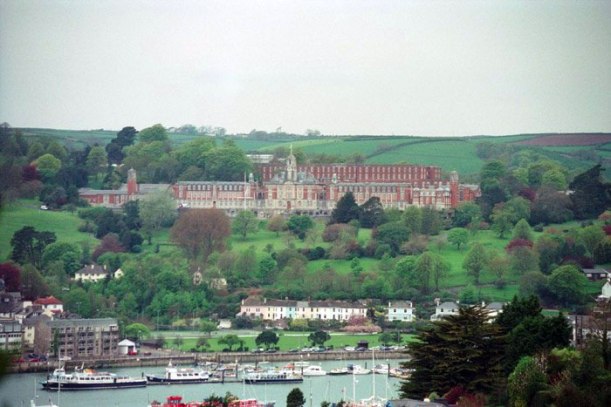 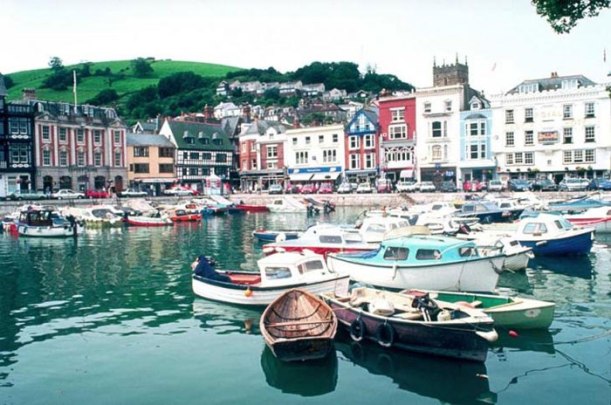 I was driving by our local petrol station in Devon when my eye was caught by a very new Mercedes CLA 45 AMG. The reason it attracted my attention was its number plate, with a red serrated strip on the left, a single word in Arabic and a string of 6 numbers. It was a Qatari registered car, a very long way from home; 4,379 miles to be precise.

Driving from Qatar is not possible as the blockade means the route through Saudi Arabia is closed, and even if it was, it is quite unlikely anyone would make this journey by car. The vehicle was probably flown to London and driven the 140 miles to Devon.

I have no idea who it belongs to or what they were doing here. The car had apparently been left all day, in a space meant for very short term parking.

During the 20 months since we left Qatar, I have continued to read the Peninsular newspaper occasionally. It was my regular daily read whilst a resident along with the Doha News, an online news blog. Today, I deleted the link to Doha News.

The Peninsular is an anodyne mix of articles providing a positive slant on most everything that happens in Qatar. Doha News offered a more critical approach, often reporting on events in a less favourable light, although it was frequently criticised in the comments section for not always taking a hard enough line.

A short article Breaking the Silence by Shabina Khatri, one of the co-founders of Doha News and one of its former  journalists, reveals the pressures of being the author of articles critical of the state and its rulers in the Gulf region.

For a considerable time, Doha News was blocked to residents in Qatar. At some point Shabina Khatri left Qatar to return to the USA. I can’t remember when ownership changed, but nothing was published for some months. Gradually articles began to appear, but pieces remotely controversial were few and far between, and it’s just become a glossy online blog version of all the other English language publications in Qatar.

We spent New Year’s Eve in Qatar. We flew in on 31 December and spent a few days in Doha on our way to and from Australia during January. It was over a year and a half ago since we left Qatar. Breaking the long journey to Melbourne made the trip to Australia much easier but also meant I could catch up with old friends and colleagues.

It felt a lot like coming home, arriving at Hamad airport and returning to the familiar sights, sounds and smells of Doha. On the first evening, after eating in the Souq, I momentarily began heading to the underground car park to go to Al Sadd, before realising I had sold the car and vacated the apartment, didn’t have a residents permit and no longer lived in Qatar since June 2016.

Nothing had changed and yet everything had changed. The journey from the airport was totally familiar as were the Riyal notes I paid to the taxi driver. Little had visibly altered other than the many huge images of the Emir adorning building and smaller versions on the rear windows on land cruisers. Al Bidda Park is finished, Musherib looks much closer to completion, a few more roundabouts have been replaced by junctions and the old broken paving along the Corniche is being replaced.

Qatar Airways no longer seems to offer free hotels nights during layovers, but room rates are very low, perhaps reflecting the over-supply of beds following the Saudi blockade. They also, inexplicably, restrict time in Qatar on the return journey, which meant that we were limited to only 20 hours layover on our way home but managed three days on the way out.

An article in the Independent newspaper in February described Qatar as “an international pariah state”. I’m not quite sure what’s going on here as Qatar, whilst nowhere near perfect, does not exhibit the disgraceful behaviour of Myanmar to the Rohingya for example. Qatar is no different from the other countries in the Arabian Gulf, so I fail to see why it was singled out. What I am saying is that I still felt a sense of loyalty to the State of Qatar despite being away for 18 months.

I intend to return the next time we can use Doha as a layover. Not sure when but I’ll definitely be back. 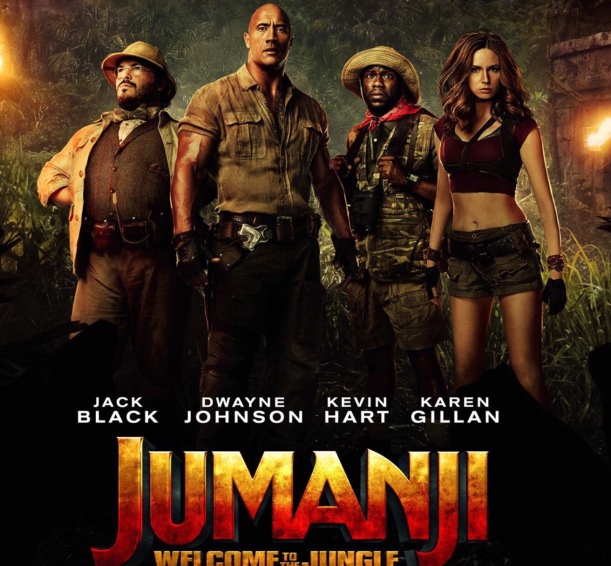 Even though I have been away from Qatar for well over a year, I am still following news of the country. I read the online versions of Doha News and the Peninsula a couple of times each week. Now it’s also reports about the problems between Qatar and many of its close neighbours in the mainsteam media.

I find myself siding with Qatar, not just because of the unfairness of the blockade, but also from a residual loyalty to the country that was my home for 4 years. The recent publication of ‘God Willing: How to survive expat life in Qatar

’ by a former expat reminded me of those 4 years.

The author, Mikolai Napieralski, gives a vivid description of a single forty-something expat arriving in Doha and making the most of what the country has to offer. He also dispenses sensible advice on the do’s and don’ts of daily life. There is also, what might best be described as exposés of life within a particular government organisation and the seedier aspects of Qatar nightlife, which, I think, will guarantee that the author is unlikely to find work in Qatar again. Being a well over forty-something  and usually asleep by 10pm, I cannot verify the accuracy of the seamier side of Doha.

The book is an easy and very amusing read, although it could have done with some editing for a few typos, and some repetition. It is certainly worth reading if you want to avoid the more anodyne publications on life in the Gulf.

Before we moved, I read the The Expat’s Guide to Living and Working in Qatar

which provided answers to many of my questions about what I’d let myself in for by uprooting to Qatar. Once we were settled, Qatar: A Modern History

by Allen James Fromherz offered ‘a multi-faceted picture of the political, cultural, religious, social and economic make-up of modern Qatar, its significance within the GCC states and the wider region.’ I guess a new chapter to review Qatar’s current situation will need to be written sometime.

All of these publications are available from Amazon.

It’s precisely one year since I left Doha, which coincidentally also marks the severing of the last remaining link to Qatar. This morning I received an email from Ooredoo saying that I owed them nothing, well at least the 4QR I still owed had been waived.

My mistake when departing may have been not to change my phone from a Shahry contract to a Hala Pay as You Go account. Without a Qatar phone, I would have been unable to access my QNB online bank account after we left. At one point, about 2 months after I’d departed, they decided to close my phone account, which would have meant a trip to Doha from the UK just to retrieve money from the bank.

I persuaded them to keep it open and paid the monthly charges from my QNB account. Once the need for the bank account was finished and the outstanding Ooredoo bill paid, I attempted to cancel my account. Easy, you would have thought.

Ooredoo customer service said I would need to come to an Ooredoo shop and provide my Qatar ID, which I obviously no longer had and now living 3,000 miles away, popping into an Ooredoo store was not an option. I repeatedly emailed cancelling and explaining that, not only was I was no longer in Qatar, I no longer required the phone account. In the meantime my account charges grew by 100QR each month for a phone number I no longer had. Emails (maybe 40) went back and forth. Their replies as always ‘Dear Valued Customer’, each time reassured me of their concern to help, but not really helping by actually terminating the account.

Eventually the account was terminated in October, but with an outstanding amount of 279QR. Although I argued that I didn’t owe the money as I have tried to cancel three months earlier, it seemed expedient to pay it just to finally close the account once and for all… so I dutifully arranged an international transfer of 279QR.

When I emailed repeatedly to ask if the account was now paid up and closed, I was eventually told that only 239QR of the 279QR had reached the account. So where did 40QR go? My own UK bank could not explain the discrepancy, but generously said they would give me 80QR to send to Ooredoo. I transferred 80QR to make up the shortfall of 40QR, however only 40QR was credited to my account, which had also now grown by an additional 4.27QR.

You know the ending. I am now debt free in Qatar. It would appear that Ooredoo (or perhaps QNB) collects 40QR from each transaction, so I would advise checking any payments you make from an international account to a Qatar business.

So that’s it… definitely no more posts about Qatar.

It’s now been over a week since I made my final exit from Doha. I don’t intend to now use this blog to criticise Qatar from a safe distance. I will remember most of my time in Qatar with affection, however only a few days after leaving, whatever bonds I felt with the country are rapidly evaporating.

The UK that I returned to was a very different one to the country that I left. Although I applied for a vote in the Brexit referendum, the forms were lost in the Qatar postal system. Either way, my vote would not have affected the disastrous outcome. I was only in the UK for a few days, and I am now in Cyprus for the next 7 weeks, watching from a distance to see what can be salvaged from the Brexit debacle.

This really ought to be the final post in my Doha blog… it probably will be, unless Qatar throws something unexpected in my direction. Thanks to all of you who regularly dropped by. If I decide to write again in a new space on another topic, I will provide a link. So bye for now.