We were due to leave our flat on Sunday, after having emptied it of all belongings. At the same time, the final utilities bill was paid, and the electricity and water were due to be disconnected. The remaining items – bed, fridge, cooker etc were to be collected throughout the day and evening.

We planned to stay in the Movenpick Hotel for our last three days in Qatar, however Sunday was a day before our check-in and we needed a bed of the night, and had to be near the flat so that we were available when things were collected.

A good friend who lived five floors beneath us kindly offered us his bed for the night. He was the first person I got to know when I first arrived in Doha. He was full of advice and practical help, which made acclimatising to the idiosyncracies of Qatar life so much easier.

Our friend is Syrian, from a country he cannot safely return to, and if he could to a house that has been destroyed in the war. He is one of a number of Syrians I have met here. Whilst, of course, we were not homeless, we were charitably given somewhere to stay for one night, unlike the millions of his fellow countrymen who are seeking refuge in safer parts of the world. What is needed is a little bit more of the kindness and generosity of our Syrian friend from western people and nations.

When I arrived in Doha in 2012, the hotel being built opposite my hotel window was a shell of around ten floors. Four years later it is still not finished.

We have now left our apartment. For our last few days in Qatar, we will be staying in the Movenpick Hotel. By amazing coincidence, we are in the exact same room that I stayed in when I arrived in Doha nearly 4 years ago.

This week, we shipped our worldly goods back to the UK. They weighed 336 kilograms, made up mainly of an assortment of domestic items and clothing.

I had spent the previous few weeks gradually packing away things that were no longer needed into cardboard boxes. The flat is now almost empty, with only the bed, a couple of chairs, cooker and fridge. These will be going tomorrow.

We had quotes from several  local businesses, eventually selecting Emovers to ship our possessions back to the UK. They defied the usual standards of customer service in Qatar, by providing clear quotations, all the information we needed, replying to emails by return, and by arriving on the agreed day and at the agreed time.

They then worked efficiently and quickly to ensure the boxes were correctly sealed, weighed and the inventory of contents of each box recorded .

Within two hours everything was gone, heading off to the cargo centre at the airport.

It is important to provide the correct shipping documentation, which is a QID (not a copy), a passport copy, and an NOC from your employer which generously permits you to export your own belongings out of Qatar.

If you are leaving Qatar, I can recommend Emovers.

This morning we did our Friday shop at Monoprix. As I was buying bread, a woman asked me if I was Ian, which clearly I was. She introduced herself as Cynthia.

Cynthia is an avid reader of my blog and one of my early followers… she recognised me from pictures I have posted over the last four years.

I should point out that Cynthia lives in Canada and is a regular visitor to Doha, staying with family who live here, and was not in Qatar specifically in the hope of seeing me.

It was really nice to meet her, however briefly, in person and know that people out there are actually reading and enjoying what I have written.

A couple of weeks ago, I handed in my letter of resignation to my employer. Over the coming couple of months, I will have to go through the byzantine bureaucratic processes that will allow my work contract to formally end, my visa and residency to be cancelled and permission to leave the country approved. Towards the end of June we will be boarding a Qatar Airways plane on a one-way ticket to London, and leaving Qatar for good.

In the meantime, we have started to sell the belongings that we won’t be bringing home… that is all the furniture and the car, and packing boxes with the things we are shipping back to the UK.

The exit has been planned for a while so we got a head start. Two beds, two wardrobes, a chest of drawers, 8-seater dining table and chairs, sideboard, coffee table and some small items have all been sold. The flat is looking very bare. You can see what’s left for sale on Qatar Living.

Selling furniture has been an interesting exercise. There are two types of buyer. The easiest is the expat who arrives at our apartment at the appointed time, looks at the item, says yes I’ll take it (or occasionally no), and pays exactly what I asked.

The other type of buyer sees the listed price as the starting point for negotiation, often by WhatsApp or SMS. Once the sale is agreed, they invariably arrive at our apartment a minimum of an hour after the agreed time.

If have been asked for heavy discounts because
‘it’s a present for my son‘.
Me: But it’s not my present to your son, so pay the full price.

I sold the car for 46000 which was what I wanted. With the change in exchange rate between the Riyal and the Pound over three years and three months that I owned the car, means that the total cost of ownership was only £3400. A rental car for the same period would have cost £18500.

The buyer paid for the car to be examined at one of the testing stations on the Salwa Road. They pointed out the paint job on the doors, but as I had already told the prospective buyer there were no surprises.

He paid in cash with a block of 500QR notes. Using the Metrash 2 app, we transferred ownership at our soon to be sold coffee table. It was as simple as that.

So we still have a few things to sell, some of which, such as the bed, fridge and washing machine that we’ll need to keep until the day before we leave. So why not make me an offer!

Yesterday I took my car to get the two driver side doors fixed. For the last three years I paid an additional insurance premium so that any repairs would be carried out by the main dealer. This year I decided not to pay the extra 750QR, which means I have a repairer allocated by the insurance company.

I headed off to the Village Car repairers located at Street 11 Gate 44 in the Industrial Area. This is one of my least favourite places in Doha. Being based on a grid layout ought to make it easy to find your way around, but it doesn’t work that way. The roads are narrow, often lined with trucks and cars. Many are still unpaved with huge, deep potholes.

The area outside is littered with some very broken cars. Inside was little different except they were in various stages of repair. There were an awful lot of damaged taxis. 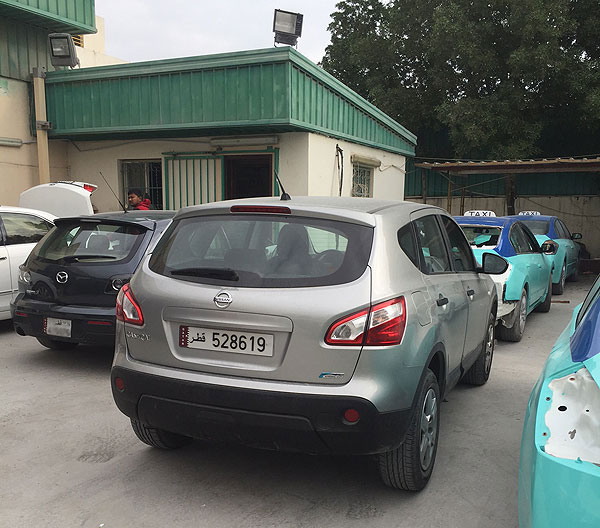 I asked when it would be ready. “Wednesday”. “But I need it on Monday as I will be out of the country from Tuesday”. “Can you do it by Monday?” I asked. They said they would try, but I don’t expect to see it again until we return to Qatar in February.

I managed just three years and four accident-free months on the roads of Doha. But last week, on the way home from work, a large old 4×4 (not a Landcruiser I should say) clipped the drivers side doors while we were both on the Al Rumailah roundabout. I ought to point out that I was not at fault – I have a witness who will support this assertion!

In circumstances like this, both cars are legally obliged to stop, however the other driver decided to rapidly speed off. We didn’t get his number, or more precisely we sort of had a set of numbers but they might not necessarily have been in the correct order or perhaps even the right numbers as it all happened so fast. Unfortunately the first time my car-cam was required, the number plate in the video is unclear. Watch for the bump!

We reported the accident by phone straight away. I was told to go to the Traffic Department at Madinat Al Khalifa. It’s the building next to the one where you register your car.

I picked my number 392. A guy came up to me and gave me his ticket 390 as he couldn’t wait any longer. The screen showed they were up to 384 so not too long to wait. As I waited and watched as drivers went to the counter and completed the process, I noticed that the police officer would occasionally accompany the driver out of the office. I asked what was happening, and apparently they need to see the damage to the vehicle. My car was not parked closeby, as I had thought I was going to the main traffic building. So I rushed off to move the car to the car park outside the building. When I got back ticket number 393 had been called, so I picked a new number – 409.

My turn came around, and I explained the details of the incident to the traffic officer. 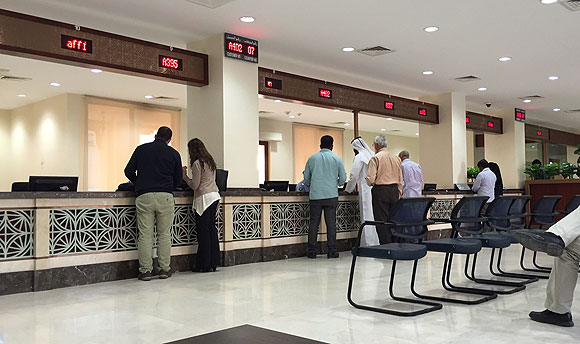 As I could not identify the other vehicle, I was told to come back the following morning to see if the accident had been reported by anyone else.

So this morning I went off again, this time parking in the correct car park. No numbers needed this time, and in a couple of minutes I saw a different officer. I explained the collision and showed him the video. He watched the short clip of the accident, and identified the car as a Chevrolet.

He asked where the car was. I told him it was outside the building in the car park. “Please get a photo of the damage”, he said. Below you can see the same image I showed him. 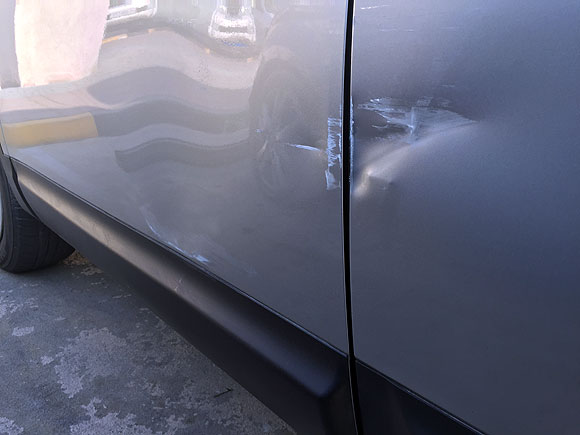 Not a huge amount of damage, but nonetheless annoying and inconvenient.

He gave me a document and said that I should return in one week, during which time they will see if they can identify the other car… very unlikely, but then, hopefully I will have the correct form to take to my insurer to authorise the repairs.

So back seven days later and I was given the documents for my insurance company. The papers are in Arabic so I have no idea what they say. I went to the insurance company, who filled in more paperwork, made copies of my ID, driving licence and car registration, photographed the damage and gave me the documents for the car repairer. I will only have to pay the 20% excess.

So on Wednesday, I will head off to the Industrial Area to book the car in to have the dents removed and the doors resprayed… and that will be another story for you.